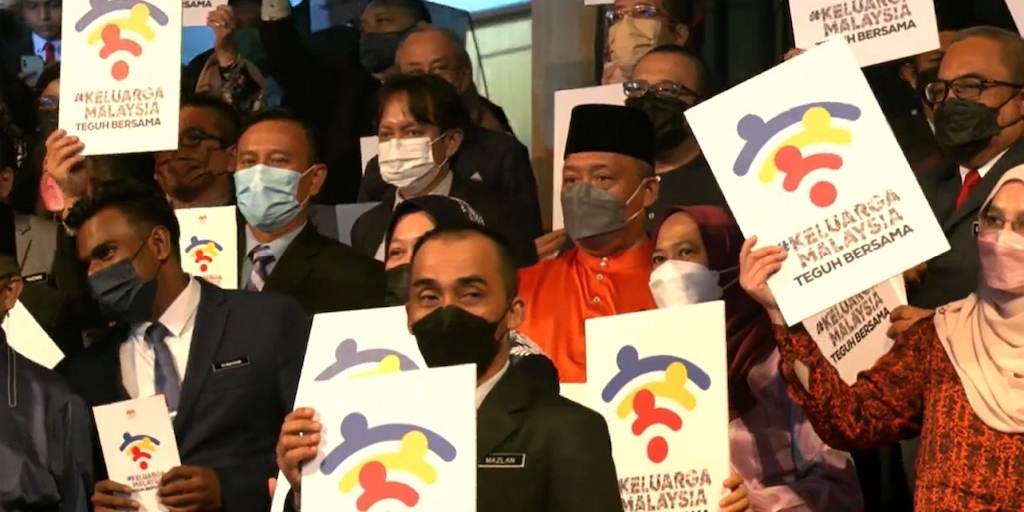 The National Day and Malaysia Day logo unveiled by communications and multimedia minister Annuar Musa yesterday has drawn ridicule from netizens, likening it to the slow Internet speed faced by many Malaysians.

Since yesterday, many have taken to social media to express their views on the new logo, which they say resembles the WiFi symbol in blue, red, and yellow.

“Is the ministry symbolically trying to say that Malaysia’s unity is still weak, like our WiFi?” Facebook user Jeevithan P Ganasan said.

One Twitter user suggested that the logo designer probably received inspiration while facing internet connectivity problems. Connectivity has been a contentious point in Malaysia especially with the delay of mass 5G adoption.

While Malaysia currently ranks #2 for fastest 5G download speeds by Opensignal, it lags behind other ASEAN countries when it comes to coverage and service availability.

“It’s firstly a WiFi symbol. The designer probably got the idea when he had WiFi problems. It’s complete, blue for Celcom, yellow for DiGi, and red for Maxis-Hotlink,” he said.

Netizen Galvin Tan tweeted that the logo is nice, but for the wrong reasons and perhaps better suited to promote 5G.

At the moment, YTL Communications’ Yes 5G remains the only telco to offer 5G services in the country.

The other major players such as Celcom, Digi, Maxis and U Mobile have been holding back from signing commercial 5G wholesale agreements due to pricing and transparency concerns.

Unlike other countries, Malaysia has decided to roll out 5G through a state-owned single wholesale network called Digital Nasional Berhad.

Last week, the MCMC has reprimanded Celcom, Digi and U Mobile for not meeting mandatory standards for quality of service.

Meanwhile, another Facebook user said the new logo represented the party-hopping done by some politicians. “I thought it looked like three people jumping left and right, one on top of the other over a ball. Maybe representing how we are suffering due to the results of party-hopping,” he said.

Yesterday, Annuar revealed “Keluarga Malaysia Teguh Bersama” which translates to staying firm together, as the theme for both the National Day and Malaysia Day celebrations this year.

Symbolising the strength and togetherness achievable through collective efforts by all Malaysians, the logo selected to represent the occasion is the WiFi symbol.

He said this was in line with the Keluarga Malaysia concept introduced by Prime Minister Ismail Sabri Yaakob.

The logo is intended to represent infrastructural development, communication systems and the expansion of digitalisation efforts for the benefit of Malaysians.

The National Day logo is based on the concept of internet coverage to represent the development of communications infrastructure and digitalisation for the convenience of the people. It consists of three bands coloured in blue, yellow and red which represents “Keluarga Malaysia” consisting of different races and backgrounds living in harmony.

The alternating dots on each band is said to represent the openness to celebrate diversity and differences for the sake of mutual progress. Meanwhile, the red dot at the bottom stands for identity and the patriotic spirit which forms a foundation for a sovereign and visionary nation.