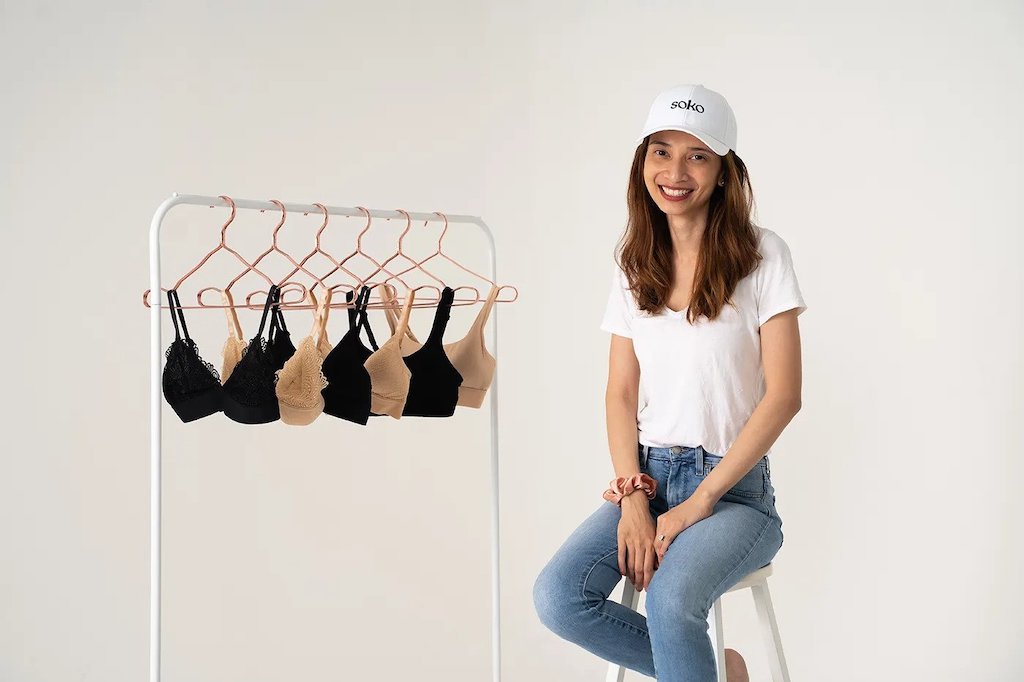 When Natasha Shazana meets her Instagram followers in real life, some can’t even recall her name. To them she is @brapreneur, the force behind a new bra company, Soko, whose mission is to bring empowerment and comfort to everyday women in Malaysia.

To launch the bra business in her home country, Shazana, a Northeastern graduate, Class of 2013, quit a private equity job in New York City. But she hasn’t regretted the move, she says.

In just a year after the launch she has grown her revenue to six figures. She won a 2022 Innovator Award, presented by Northeastern’s Women Who Empower, in the experienced alumnae category, and $22,000 in June.

“I am a big extrovert, I derive my energy from other people,” Shazana says. “That is why I love and [am] so excited to be a part of the Women Who Empower supportive community.”

Her old college friend Jessica Pogranyi confirms, “She is super sociable, probably the most sociable person I know.

While Pogranyi is preparing herself to launch an environmentally-friendly mezcal brand in Mexico, she and Shazana often discuss their businesses.

“She is a great listener and advice giver,” Pogranyi says. “Every time I message her, she is awake somehow.”

And Shazana does have a lot to share after the last three years of developing a product and launching her business.

Shazana grew up between Malaysia, Singapore, U.K., Australia, Saudi Arabia, and Qatar, while her parents pursued careers in banking. At the age of 17, Shazana came to study at Northeastern’s D’Amore-McKim School of Business in Boston, after her prom date told her about the university and its co-op programs.

She maximized every single opportunity at Northeastern, Shazana says, doing two co-ops, two internships, and a semester abroad in Shanghai, China. She majored in marketing and finance.

Surprisingly, unlike a lot of her classmates, she struggled to secure a job before graduating, despite applying to close to 200 companies. She almost started a food truck business to create her own opportunity, before she landed a foreign exchange broker position and moved to New York City.

“I had five computer screens, and I was getting yelled at all the time on the phone,” she laughs. Next, she spent five years working in institutional sales and private equity at Morgan Stanley, which she left in 2019 to move back to Malaysia to pursue her own entrepreneurial idea.

Shazana was ready to try her own business with the support of her future husband, Chris Evans, who also quit his day job and originally acted as Soko’s co-founder, providing her with big picture, strategic advice.

Although Shazana has not lived in Malaysia for almost two decades of her life, she felt a pull to go back and try to build a business that would represent real Malaysian women.

She ventured into bras because women’s empowerment has not reached this industry in Malaysia yet. The existing brands did not reflect values of modern women or what local millennials and Gen Z’ers wanted from them, Shazana says.

“I wanted to drive change and accelerate change in the broad industry in terms of representation, first and foremost,” Shazana says.

As she says, the industry either offered “grandma” bras or pushed oversexualized images of mostly white women, photoshopped and airbrushed, in the ad campaigns. Very rarely one could see a brown skinned model in the ads.

“For me, that’s not enough. Like, why do we put up with this?” Shazana says.

She knew that in a Muslim country like Malaysia, change could only be brought about in a respectful way and at a pace that people can appreciate there, she says. But Shazana wanted to at least start and have a brand that stood for representation 365 days a year and not just during infrequent token diversity ad campaigns.

Shopping for a bra was an overwhelming experience in itself, with hundreds of items from different brands packed into one store, which made women as uncomfortable as Shazana felt, buying her first bra at a Malaysian mall 20 years ago.

“I have my personal stories, but I interviewed, spoke at conferences and focus groups and surveyed over 300 women before I even launched my business,” Shazana says.“I needed to see if other people feel the same pain about representation, about the dislike for the bra shopping experience.”

Shazana focused on three things with her bra brand: representation, utmost comfort and great shopping experience. She called her company Soko, from a Malaysian word sokong, which in English means “support.”

To create the bras she would be proud of, Shazana conducted extensive research. She found an experienced technical designer who carefully designed the bras. First manufactured samples were tested by 50 women, who slept, jogged and jumped in them.

Currently, Soko offers three styles of bras—an everyday wireless bra, a lacy bralette and a sports bra-like lounge one—for about $29 each. With the Innovator Awards prize money, Shazana is planning to expand Soko’s size offering from L to 2XL.

During the COVID-19 lockdown, Shazana started building her community on Instagram under the handle “brapreneur.”

In the first three hours after the launch, Soko made five digits in sales, Shazana says. She attributes the launch success to her followers who were posting about the bras on Instagram.

She is growing her business organically, through word of mouth because it is capital intensive and she is using her own limited savings.

“Everything I make goes back into saving for our next purchase order,” Shazana says.

Her main marketing tools are social media, specifically, Instagram, and pop-up events. In Soko’s first year of operation she only spent $2,500 on marketing.

There were some major setbacks in her entrepreneurial journey as well. The first factory in China she used to manufacture the bras ghosted her during the pandemic. The second factory in China did not meet the quality standard Shazana hoped for. She found a third factory in Sri Lanka that came highly recommended for their workmanship.

She cherishes the feedback and stories her clients share with her, from a cancer survivor, to a mother who bought the first bra for her 12-year-old daughter, to a transgender person, to a client who was happy to see a model in a hijab that looks like her.

“I have grown the most in these last few years than I have ever in any other chapter in my life,” Shazana says.

That is why she doesn’t regret leaving the corporate job at Morgan Stanley. But she is eager to share practical advice she has learnt the hard way, “Don’t quit your day job immediately is what I wish someone had told me.”

This article was first published on [email protected]