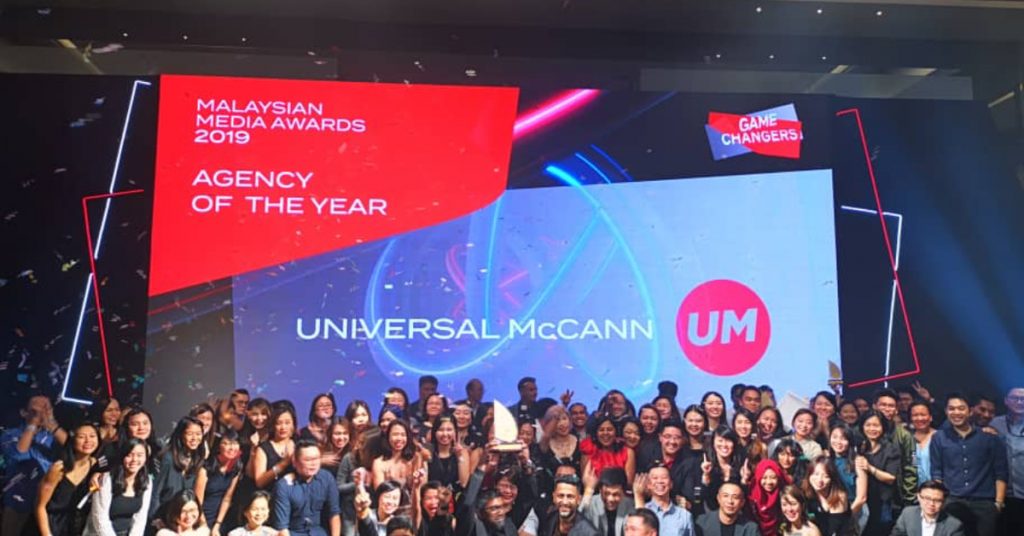 It was a night to remember for Universal McCann as they won both the coveted Agency of the Year and Grand Prix awards, on top off six gold, six silver, and four bronze awards at the 15th Malaysian Media Awards (MMA), held at Nexus Connexion in Bangsar South.

The Grand Prix was awarded for Universal McCann’s ‘Anything’s Better with Golden Egg Crunch, Even Ad Breaks!’ campaign which was executed for QSR Stores Sdn Bhd’s KFC brand; the same campaign also won gold in the ‘Best Integrated Media Campaign’ and ‘Best Use of Mobile’ categories.

Organised consecutively for 15 years by the Media Specialists Association (MSA), the MMA 2019 featured a total of 14 categories, with special awards including the Grand Prix for the best performing campaign, Advertiser of the Year and Agency of the Year.

The judging panel comprised of local industry leaders, who evaluated entries based on merit, integrity and performance.

UM emerged as winners with 6 gold, 6 silver and 4 bronze awards across the 14 categories, also taking home the Grand Prix and Advertiser of the Year with client KFC for the second year running. The agency walked away with 16 medals and 19 wins.

Commenting on this accolade, Amit Sutha, Group Managing Director of Universal McCann said, “Our industry is a people-based one, and winning big truly reaffirms my faith in the quality of our teams, the vision of our client partners and the enthusiasm of our media allies.

In a world of disruption, the secret sauce has been looking at media through the lens of demand rather than reach and frequency. In a world of clutter, the differentiating factor has been an intense focus towards creativity and innovation.”

The winning cases demonstrated a variety of smart usage across media including using dual screen technology for KFC’s Golden Egg Crunch; utilising a vending machine to teach and engage planners with Google; advanced econometric analysis to plan media for Giant; and
hacking YouTube videos for Anchor.

KFC’s Chief Marketing Officer, Angelina Villanueva said, “This is a satisfying achievement for both the UM and KFC teams. The rigour, diligence, smarts and collaborative effort between Agency and Client is crucial. Importantly, it is needed for winning with customers. UM understands that.”

Advertiser of the Year, QSR Stores Sdn Bhd, also recorded wins for their campaigns with Universal McCann such as ‘Listen, Listen, Listen – An Unheard of Burger!’, ‘Framily Radio Reunions!’, ‘The Other Sanders’, ‘Optimization on Steroids’, and ‘Hungry, Click, Eat’, just to name a few.

The awards honour media campaigns based on three criteria: insights, strategy and idea; media execution; and results and effectiveness. This year’s MMA, themed ‘Game Changers’, saw a total of 116 finalists shortlisted from 208 submissions competing for 45 awards across 14 categories.

“I would like to express my hope that the Malaysian Media Awards will continue to provide a platform that both celebrates and nurtures future talents within the business of media buying and planning and take the industry to greater heights,” said Yeap Chee Weng, President of the Media Specialists Association of Malaysia (MSA).

Commenting on this year’s submissions, Andrew Leong, the Organising Charmain for the Malaysia Malaysian Awards 2019 said, “The quality of work submitted not only impressed but also inspires confidence in an industry that is facing continual change, especially with the rise of new digital platforms.”

Digital was certainly a mainstay at the awards. ‘The Best Integrated Digital Campaign’ – a new category which focuses on effective work that utilises at least three different digital platforms – was awarded to Initiative Media for their ‘Ah Huat Dances His Way To Every Malaysian Home’ campaign done for Maxis.

Initiative Media also took gold for ‘Best Use of Cinema’, another new category, for their work with OLDTOWN White Coffee 3-in-1.

Organised annually by MSA, this year’s MMA was preceded by the inaugural Malaysian Media Conference – a full-day event that assembled personalities from different fields within the media industry.

The speakers shared their personal and professional experiences in regards to disruption in the media, marketing, and communications industry.