(Marketingmagazine.com.my) – Singtel is livening up this Lunar Year New holiday by bringing back the fun of firecrackers – digitally – to Singaporean families.

Together with Ogilvy & Mather (O&M),Singtel has created a one-of-a-kind mobile-enabled site (http://singtelfirecracker.com), which simulates firecrackers, widely used in the past as an auspicious way to celebrate the festive season.

Once the highlight of Lunar New Year celebrations, firecrackers were banned alongside fireworks back in 1972 due to concerns over public safety.

The Chinese believe that the tradition of lighting Chinese firecrackers drives away evil spirits and helps usher in prosperity.

“We’re excited to bring this tradition back to Singaporeans. Thanks to technology, our elders get to re-experience the fun of firecrackers while the younger ones get their first taste of this tradition. Anyone with a smartphone can join in the party!” said Ms Diana Chen, VP of Mobile Marketing, Consumer Singapore, Singtel.

Through the Singtel site anyone can access the digital firecracker for free, on their Chrome or Safari browsers on both Android and iOS smartphones.

Chris Riley, Chairman, Ogilvy & Mather Group Singapore, said, “In the digital age, when most Singaporeans have a smartphone, we wanted to use mobile technology to re-create the firecracker experience virtually but in the most vivid way possible. This highly interactive experience will bring family members and friends together as they line up their phones to create a long chain of firecrackers – the longer the better – to usher in prosperity.”

For users in Singapore, they also stand a chance to win a cash ang bao ranging from S$88-$888 from now until 22 February 2016. The mobile site is also being promoted through Singtel’s festive CNY TVC, print ad, social and digital banners.

Start your own firecracker chain now at http://singtelfirecracker.com! 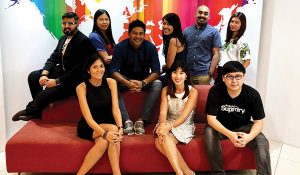