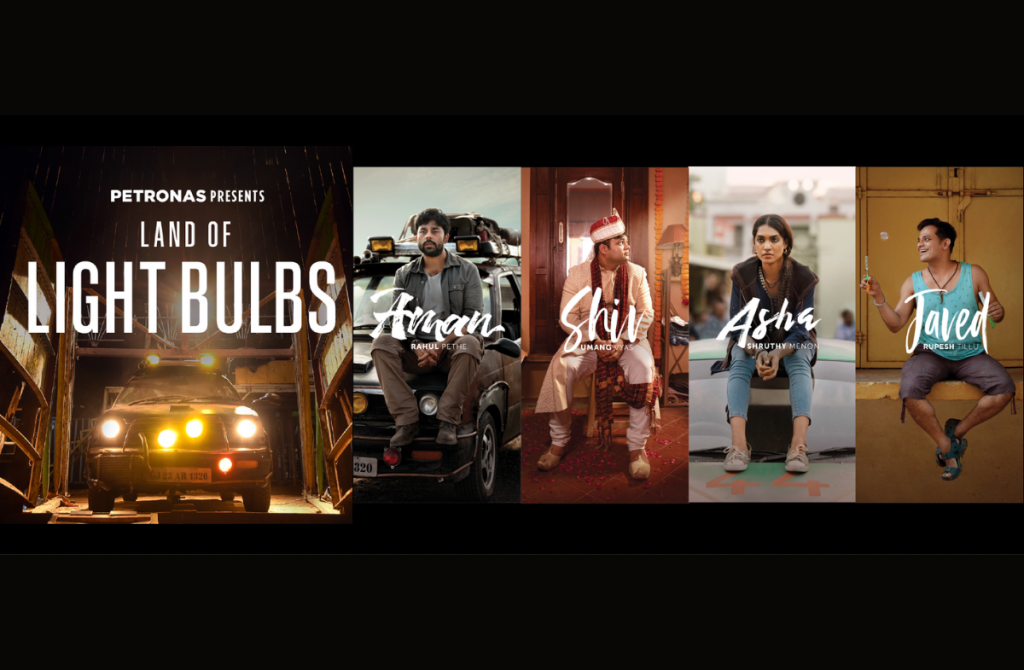 Directors Think Tank is also ranked as Asia Pacific’s top Production House of the Year by Campaign Brief’s THE WORK 2020 and their Adfest victories last month included a Silver and Bronze.

The film was inspired by the energy that drives India: the spirit of ingenuity. “Jugaad” (frugal innovation) isn’t just an ingenious hack, but a culture among Indians—a value in line with PETRONAS. No stranger to reinvention, PETRONAS has gone through its own journey of innovation over its 45-year history.

… THE STORY CENTRES ON AMAN, AN ORGAN DONOR, WHO GRAPPLES WITH IMPENDING DEATH AND MAKES AN EFFORT TO GIVE MEANING TO HIS REMAINING DAYS BY TRAVELLING ACROSS INDIA …

All three episodes were co-directed by India’s Rajesh Mapuskar, winner of the National Film Award for Best Director for his film Ventilator, and Malaysia’s Rajay Singh, one of South-East Asia’s most awarded director from Director’s Think Tank.

The web film series is divided into three parts, each of 20-minute duration and takes viewers on a roller coaster journey of friendship and obstacles. The story centres on Aman, an organ donor, who grapples with impending death and makes an effort to give meaning to his remaining days by travelling across India to meet the child recipient of his gift of sight.

Along the journey, he meets three unique individuals – Shiv, Asha and Javed, who give him the strength in various ingenious ways, to complete his journey, exemplifying the ingenuity and resourcefulness in finding solutions to life challenges.

As the unlikely friendship blossoms among the four of them, Amar realises that it is not the destination that matters, but rather how they come together to enrich the lives of others.

The fast-paced car scenes, scenic beauty of remote Indian villages and depth of characters play out to transport you to a place of hope. The purpose of building and reengineering despite scarce commodities in the harshest of lands creates a sense of wonder, witnessed by us through the eyes of the characters.

… THE PROJECT WAS TO CREATE A BRANDED CONTENT CAMPAIGN AND STRENGTHEN PETRONAS’ PRESENCE IN INDIA. LAND OF LIGHT BULBS DEBUTED AT PETRONAS’ ANNUAL SUMMIT IN INDIA TO SHOW PETRONAS’ UNDERSTANDING OF THE CULTURE…

The project was to create a branded content campaign and strengthen PETRONAS’ presence in India. Land of Light Bulbs debuted at PETRONAS’ annual summit in India to show PETRONAS’ understanding of the culture and the importance of business ties with business leaders there.

Rajay Singh shares, “We started with all guns blazing. Because the task of making this felt like the plot to The Magnificent 7. Our search for the best in town took us to Madhu and Rajesh and before we knew it, it became the story of the magnificent 148 strong cast and crew. We could not have done this without a single one of them saddling up and taking on this wild ride with us.”

Listen to what Emily Bull – Spikes Asia 2021 Entertainment Jury President and Managing Director & Co-Founder of hellofuture.tv had to say about the winning work here.

Executive Creative Director Chan Woei Hern adds, “We got a chance to bring this web film to life through a cross-country partnership of our own, similar to PETRONAS’ partnership with India. It was fun, hectic and action-packed. We had an epic tour of duty spanning 17 days from the shoot to the release of our first chapter.”

And take a peek at some behind-the-scenes footage during the production here.