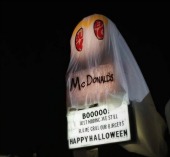 (marketingmagazine.com.my) – Burger King has taken a dig at one of its rivals, McDonald’s by dressing up one of its outlet as McDonald’s for Halloween.

A Burger King restaurant in Queens, New York dressed itself up as “Ghost of McDonald’s.”
The store was covered in massive white sheets with cut outs for eyes and a roughly spray-painted “McDonald’s”, while a sign below the ghoulish display reads: “Booooooo! Just kidding, we still flame grill our burgers. Happy Halloween”.

Making sure the prank was noticed, Burger King posted a reaction video to YouTube and shared their cheeky work on Twitter.

Burger fans and passers-by were impressed by the McDonald’s diss.

“I would say this is the best Halloween costume of the year,” one man said.

Twitter followers responded with both appreciation and trepidation over the trick, with one person tweeting that it was “the pettiest [sic] thing I’ve ever seen.”

This isn’t the first time Burger King and McDonald’s have crossed paths. In line with world Peace Day Burger King launched an award winning campaign for both brands to collaborate together on a peace burger which combined Burger King’s Whopper and McDonald’s Big Mac. The McWhopper campaign took home several awards at the recent Cannes Lions and Spikes Awards.