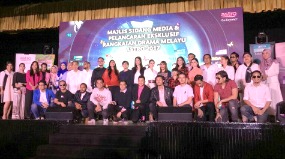 As part of Astro’s efforts in strengthen its legacy in the arts industry, four of its main channels, Astro Ria (channel 104), Astro Prima (channel 105), Astro Warna (channel 132) and Astro Oasis (channel 106) will be the main hub for Malay Dramas through its additional drama slots.

To cater to the wide range of audience, each channel carries a different genre of dramas that has its own uniqueness. Existing drama slots includes ‘Mega Drama’, that carries a light romantic drama genre on Astro Ria and Ria HD (123) which is broadcast every Monday to Thursday from 10pm to 11pm. Another option for audience is ‘Tiara’ on channel Astro Prima that broadcast every Monday to Friday, 6pm to 7pm.

The latest addition to the drama slot is ‘Skrin Komedia’ on Astro Warna and Mustika HD (134) which will be broadcasted starting March 15, 2017 every Wednesday to Friday from 9pm to 9.30pm. Astro Oasis has also introduced their own drama slot called ‘Raihana’ which will start on April 3, 2017, every Monday to Wednesday from 9pm to 9.30pm. Both slots, “Tiara” and “Raihana” can be also watched on Channels Maya HD (135).

According to Channel Head for Malay Segment, Raqim Ahmad said “An increase in demand for Malay dramas is increasingly rising. These can be proved by the extraordinary welcome received from the audience when a drama is aired and it is not something new in the industry.”

With regards to the additional two slots on Astro Warna and Astro Oasis, Raqim added, “Success that was achieved through dramas on Astro Ria and Astro Prima reinforces our desire to continue and elevate Malay dramas to a higher level. With the addition of these two drama slots, more dramas can be watched by viewers and at the same time open more opportunities for our local artists to work. Given that each drama slot has its own genre, we will maintain the original element of a drama that is broadcasted on each channel.”

“This effort will not only offer more dramas to viewers on all four main channels, it has also given direct access to Malay dramas to all Astro customers,” concluded Raqim. NIVEA shines in Malay market and wins Gold at APPIES