Small and medium enterprises (SMEs) are expecting an announcement on further refinements to the stimulus package, with provisions to help tide them over during this challenging period.

Most SMEs do not have enough cash to even meet payroll after one month of forced idleness. If no help is forthcoming quickly, there may be a bloodbath out there.

Newly appointed Finance Minister Tengku Datuk Seri Zafrul Aziz, along with Minister in the Prime Minister’s Department Datuk Seri Mustapa Mohamed and Transport Minister Datuk Seri Wee Ka Siong, have been meeting the various associations over the past two days to get a better idea of what the various industries need so they can provide more targeted help.

SME Association of Malaysia president Datuk Michael Kang said that he hopes the paper on SMEs will be tabled at the Cabinet meeting on Wednesday.

Kang met with Zafrul, Mustapa and Wee on Monday to provide feedback on the Prihatin stimulus package announced last Friday. His feedback was simple. “We are looking at the government to assist with payroll and rents or provide a very specific short-term loan for six months’ expenditure. Just to rollover for the MCO (Movement Control Order) period.”

He points out that in the stimulus package announced last Friday, Prime Minister Tan Sri Muhyiddin Yassin said the wage subsidy was conditional on companies paying full wages with no pay cuts or unpaid leave. “This will kill the SMEs. If the government can pay a certain percentage of salaries, like they are doing in the UK and Canada, it would assist the SMEs in reducing the burden of fixed operating costs. And not only salaries but other fixed costs such as the EPF (Employees Provident Fund) contribution, utility bills and rents.”

Kang says SMEs are not in a position to roll over their loans because 80% of them do not qualify for a loan. “They always use their own money because these days, you need to go through very stringent criteria to qualify for a loan. So, a lot of SMEs are facing a big problem because cash flow on hand will last them one month, maybe two.”

He points out that the needs of most SMEs are very simple. “You just need to help us roll over our costs until the economy recovers and we can make money and pay it back.”

MyF&B spokesman Joshua Liew, who met the ministers today, says they acknowledged that the F&B industry had been the hardest hit by the MCO. “Tengku Zafrul, in particular, was very interested to find out specific case scenarios of alliance members of various sizes and what they were going through. He said the government needed to give businesses more targeted help and that the F&B industry seemed to have experienced the most drastic drop, from what he had seen.”

One issue they took up was the commissions charged by delivery service companies. “He asked what their commissions were pre-MCO and after the MCO was in place, and was shocked to find that they had not dropped their commissions, at least for this particular period. I think he has assigned his officers to call and talk to them,” says Liew. 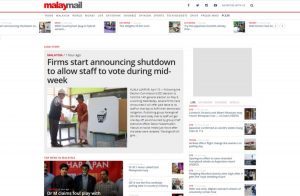 Media in the time of MCO: Malay Mail grew most in readership among major English news sites