With the advent of the new media, print has often being ridiculed for being slow and stale. But with the fake news menace clogging the information chambers, print has hit back.

They have launched a campaign clearly targeting the digital media by highlighting the importance of the printed word.

Earlier this week, all major dailies in India carried a full-page advertisement ‘Print is Proof’.

According to this campaign, signed by bigwigs in the print media including the likes of The Hindu Group, Hindustan Times, The Times of India, Dainik Bhaskar, print is still the most reliable source of news.

Talking about the campaign, Raj Jain, CEO, BCCL, says, “Before a piece of news gets carried in the newspaper, it goes through a rigorous process of being checked and re-checked by various editors at various levels.

“Digital is very fast. It is very difficult to trace back a story’s source in digital. While we are not for or against any form of media, we strongly stand by the fact that in newspapers we still exercise complete control on what goes in print.”

The advertisement that went in print said, “If we don’t have the facts we don’t print the news. It’s that simple.

“For us, the starting point of any story is verification. But for social media, its sensation. And if a story doesn’t check out, it can always be deleted. As newspapers, we have no such luxury. You see, it’s hard to go back on your word when millions have a copy of it. So we do it right.

“We take the time to verify all the information before we call it news. News that’s backed by fact. Print is proof.”

“There is a strong, institutionalised newsroom and verification system. Knowledge and skills are imparted to ensure there is systematic monitoring, investigating and reporting on disinformation.

“At the same time, in keeping with the change of format requirement, every newspaper brand worth its salt is also building online versions of their newspaper brands,” he says.

According to Agarwal, the first ad is a part of a two-month-long campaign. “The leading newspapers have come together seamlessly, more will join in the second round. Dainik Bhaskar has acted as a catalyst.

“The ‘Print is Proof’ campaign belongs to the print industry. It is a momentous occasion as it has brought the industry together without the help of a common platform,” he remarks.

Print, meanwhile, has a growing trust among advertisers too.

“Print is growing and continues to enjoy the second largest status in the adex. Circulations are growing, cover price is on the rise, language markets are growing and new geographies are coming under the ambit of print.

“There is growing trust in the medium because it provides credible news and knowledge to the reader. For the advertiser, it is a trusted and non-intrusive environment for their communication.

“It is a centre of public life – one of the vital signs of our nation. The campaign is self-explanatory. Print has the edge because no one edits the editor. No one steers our opinion,” Agarwal adds.

‘Print is Proof’ however is not the only campaign being run by the print media.

Rajan Bhalla, CMO, HT Media Group, “Recently, we launched a B2B campaign around ‘Print is the Answer’ to drive awareness around the efficacy of print and its continuing relevance in India.”

“The ‘Print is proof’ campaign is a joint industry initiative to reinforce that the print platforms are fundamentally fact driven and do not promote either fake news or sensationalisation. The printed word carries high credibility and trust,” adds Bhalla.

For the Hindu group, supporting the campaign comes from their belief and practice of factual and objective journalism.

Dr Sathya Sriram, VP, Strategy and Marketing, the Hindu Group, says, “At The Hindu Group, we believe that journalism is primarily a disciple of verification.

“While we trust our sources, we also check and double-check before publishing because once it is printed, it can’t be ‘edited’. Fake news, alternate truths can be hard to separate from the real news, the real facts. That’s why print journalism is here to stay. Because when in doubt, that’s where we will go to verify – the printed word.” Would you buy your magazine from a vending machine? 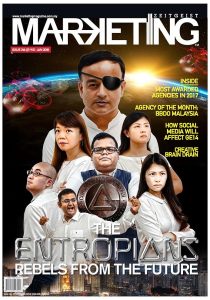