(marketingmagazine.com.my) – Giving drinkers yet another reason to buy a beer, Heineken New Zealand’s award winning campaign convinced people that their next drink would ‘save the entire world’.

Winning the Grand Prix for Outdoor, ‘Brewtroleum’ highlighted how the brand was being environmentally friendly by turning its leftover brewing yeast into biofuel.

Synopsis
Beer consumption is in steep decline globally, nowhere more so than in New Zealand where it is at it’s lowest since World War 2. The agency was briefed to create a TV campaign with the objective of trying to address this decline but soon realised that Kiwi blokes didn’t need another cliché beer ad. What they needed was a brilliant reason to re-embrace (and drink more) beer. So that’s what they delivered. The agency created a way that men could save the planet by doing what they love, an idea that would help men justify drinking more beer by turning drinking into a selfless act of sustainability.

Description
DB Export has always been a beer that had led the way in New Zealand – the creative platform that this work was operating under was ‘DB Export – Made By Doing’ which celebrates the pioneering history of both the beer and also its founder, Morton Coutts. The idea was to turn drinking beer into a selfless act of environmental heroism – to reframe the permissibility of drinking beer within the company’s target market. So we took the surplus yeast leftover after we finished brewing DB Export, and used it to create a biofuel called DB Export Brewtroleum. Brewtroleum emits 8% less carbon than traditional petroleum, so every time a man drinks DB Export, he’s helping to save the entire world.
‘Drink DB Export, save the entire world’ was the perfect, tongue in cheek excuse the average NZ man needed to have a DB Export.

Execution
Across all consumer-facing communications, the call of action was made towards the men of New Zealand. The environment faces many threats, but by simply by drinking DB Export they could help save the entire world. The agency launched with the campaign with a hero site – a completely rebranded Gull petrol station in the middle of Auckland. Promoting this location with radio partnerships they experienced kilometre-long queues down the street on our first day. But this wasn’t just a single site PR stunt. Brewtroleum rolled out to every single one of the 62 Gull petrol stations across New Zealand – turning all of their forecourts into ambient advertising for the brand– with a through the line campaign (TV, social, digital, outdoor, sampling) supporting it and calling on men to drink more DB Export. The national scale of the campaign meant that nearly all New Zealanders had the opportunity to fill their cars with Brewtroleum.

Outcome
The most important result of this campaign was simple. In a beer market declining at 6% per anum, sales of DB Export grew by an unprecedented 10% making it the fastest growing beer brand in the country. Responding the campaign’s cry of help the country men rallied to the planet’s defence. Thanks to their dedicated drinking we turned 58,000 tonnes of yeast slurry into 300,000 litres of Brewtroleum. Brewtroleum was sold on pump at 62 stations around the country, meaning that consumers were essentially paying $2.05/litre for our marketing.

During the campaign period, 8.6 million bottles of DB Export were sold. The campaign resulted in a 50,000kg reduction in carbon emissions, which saw DB Breweries go on to win the nation’s highest sustainability award, Innovation in Sustainability. Heineken is now rolling the idea out through 50 of their biggest global breweries, potentially saving millions of tonnes more of carbon from entering the atmosphere. 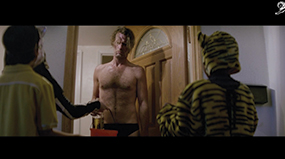 Shining the spotlight on ‘The Less Visible’