Utusan Malaysia given the boot

Sources from Malaysiakini has reported that the Education Ministry has instructed schools, universities, colleges and other institutions under its purview to cease its subscription of Utusan Malaysia, an Umno-owned newspaper.

Wan Saiful Wan Jan, who is the special adviser to Education Minister Maszlee Malik issued a memo on the matter.

The memo stated that “For your information, the minister has requested that subscriptions for Utusan Malaysia by all divisions, agencies, schools, universities, college and institutions under the Education Ministry to cease immediately.”

The memo which was written on 18 July was then directed to the Education Ministry’s chief secretary Mohd Gazali Abas.

The official, who spoke on condition of anonymity, said the Education Ministry is also looking at cancelling subscriptions for other newspapers.

“This is to cut cost as nowadays, the same news can be obtained online,” he said.

What’s next for ‘the scariest man in Malaysia’ ? 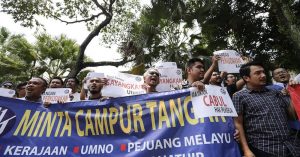 Spare a thought for journalists