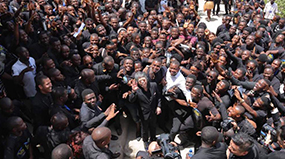 We were inundated with pictures of this billboard from readers featuring an ad by Tan Sri Dato’ Sri Paduka Dr Lim Kok Wing,

one of Asia’s best-known communications strategists and the man behind Limkokwing University of Creative Technology globally.

As a Malaysian, his credentials are stellar and there is really not enough space here for us to list them all.

Not one to shy away from fame, his name is everywhere for all to see. He has taken personal branding to another level.

But you could argue the ranking displayed on the billboard is dated 26th September 2016.

Apparently, the source of the claim is Quintly.com, an online social media analytics tool company based in San Francisco and Germany.

And “influential” can be a 10-letter dilemma, but who’s counting.

Even though follower count is considered one of the darlings of vanity metrics and armies of bots are known to create fake followers, the man on the street is blind to all these tools.

Tan Sri, who is currently in Africa, responded to us by saying, “We never lie or exaggerate, we don’t have to.”

Sivanathan Krishnan, CEO of Trapper Media Group and ExCo member of the Advertising Standards Advisory Malaysia (ASAM), told MARKETING recently, “I think that consumers should always question the source of claims and not just believe the claim as it is dependent on the methodology.”

One for the road, the maestro who designed the future.

New Zealand companies pulling out of Facebook and Google