Defining the advertising gateway to Malaysia, one screen at a time - MARKETING Magazine Asia Skip to content 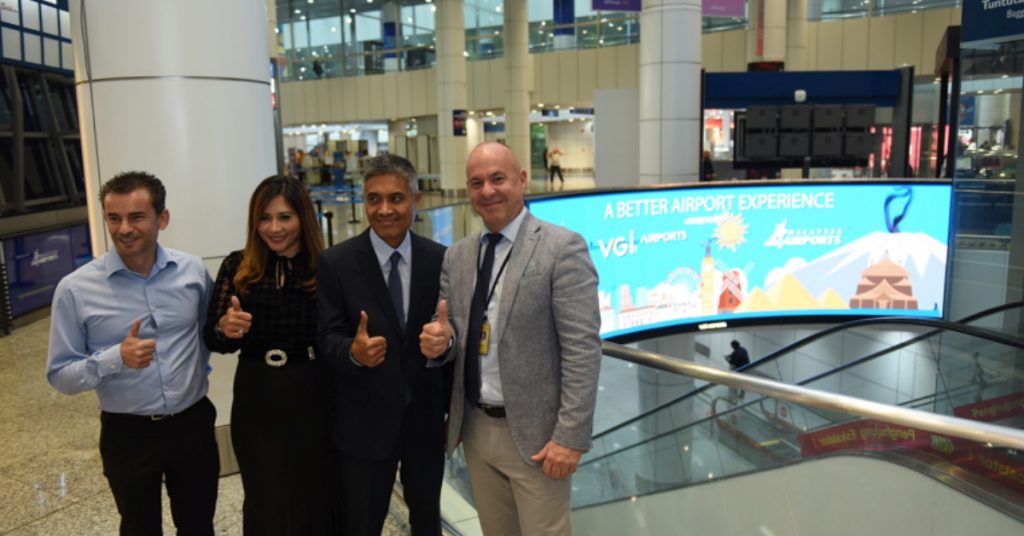 This year alone, so far there have been 77.6 million passengers that have come through  Malaysian Airports. To put that number into perspective, the current estimated population in Malaysia is 32.6 million.

Air travel is growing in popularity across the world, and the global aviation system, especially airports; are undergoing projects big and small to keep up.

The four new large format LED screens that were placed are part of a network of digital media solutions VGI has been installing in KLIA over recent months as part of their strategy plan to make the airport a global benchmark in terms of advertising innovation. These latest screens are placed to target international passengers as they travel by foot from the contact pier, towards the immigration counters.

During a press conference held at the unveiling ceremony, senior general manager for Commercial Services of Malaysia Airports, Nazli Aziz said that airports are moving away from being merely transportation hubs to becoming destinations themselves. With longer transit periods which increases the dwell time in airports, MAHB is constantly working on enhancing the airport ambiance for travellers. Hence why they are embracing a commercial reset strategy.

“We are delighted to have VGI Airports’ new media installations here at KLIA as this complements the digitalization of our airport assets with large format displays at the Main Terminal Building (MTB),” Nazli said. “Achieving this requires constant innovation of the airport landscape, including leveraging on the latest technologies to meet and exceed this mission.”

Asia Pacific is marked as the fastest growing airline passenger market in the world and is predicted to account for 40% of total global passengers, making it vital for airports to be able to meet that demand.

Nazli added that the digital platforms that are being installed will further enhance awareness and messaging in the airports. This is good news for advertisers who are interested in using these locations as a target because the influx of passengers at KLIA alone saw a growth of 3.2% in September 2019.

Jonathan Goldsmid, COO of VGI Airports said the installations that marked the third phase, shows they are on track to deliver against the whole objective that was set for the initiative: make KLIA a leading airport in South East Asia, for innovative airport advertising solutions.

“By mid 2020, we will have completed all 6 phases and invested up to RM35 million to create one of the world’s most comprehensive airport advertising product portfolios,” Jonathan said. “This will include both tactical digital media assets designed to enable brands to target specific audience segments at key touch points throughout the airport, and a number of large format truly iconic media products designed to deliver exceptional impact and creativity,” he added.

According to MAHB and VGI, the three phases so far have already resulted in significant advertising investment from new domestic and international brands and they expect to see this positive trend continue as they roll out the remaining three phases of the project.

Click on this video below to see screens launched by VGI Airports and MAHB during the unveiling ceremony.