Alphabet Inc’s Google unit told U.S. election regulators in a letter seen by Reuters on Thursday that it “strongly supports” tightening rules on online political advertising as part of efforts to curtail “foreign abuse and influence” in elections.

Federal lawmakers have criticized Google, Facebook Inc and Twitter Inc for not doing enough to identify and block Russian agents from buying ads on their services. U.S. authorities say the ads were intended to influence voters during the 2016 presidential election.

U.S. law permits foreign entities to advertise about certain issues if they disclose such spending, but it is unlawful for them to interfere in elections.

In September, the Federal Election Commission, which sets campaign finance rules, voted to consider ensuring that those disclosure rules apply to online activity.

It opened a public comment period that is set to expire Monday.
In the letter, Google on Thursday offered its formal response to the FEC’s deliberation.

“Now more than ever, we must work together to improve transparency, enhance disclosures and reduce foreign abuse and influence in U.S. elections,” the company wrote.

The stance marks an about-face from 2010 when Google sought an affirmative exemption from a requirement that an ad should state who purchased it.

The commission did not reach a consensus on the exemption at the time.
Google now is calling on the commission to extend disclosure rules that apply to TV and print ads to the Web.

“Google strongly supports the commission’s proposal to proceed with a rulemaking so that the commission can provide the clarity that campaigns and other political advertisers need to determine what disclaimers they are required to include.”

The company, which is the world’s top seller of online ads, also asked federal regulators and lawmakers to expand restrictions on foreign participation in elections to cover content distributed and advertised on the Internet.

Ratifying such provisions could give tech companies guidance on how to treat soft influence, or content from organizations such as RT, a Russian news outlet that has drawn concerns from lawmakers for peddling propaganda on Facebook and Google’s YouTube service.

In its letter, Google also reiterated plans to offer the public a database of election ads purchased through its service.

In addition, the company has said information about buyers would be more accessible. Reuters 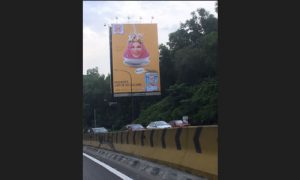 These Dairy Champ billboards will definitely make you look twice