Racing against time you try to nail that perfect copy, packaging your brilliance in a zip file and emailing it over to a suit, only to be told that the client changed the brief and once again you face a blank sheet.

It may sound simple but this year’s theme for The Cannes Lions International Festival of Creativity was a good reminder to appreciate the people who pour their blood, sweat, and tears into their campaigns.

What some call the Olympics of Advertising, this week-long festival which consists mainly of illuminating talks, star-studded awards and glitzy parties was one of the most anticipated industry events of the year.

Each of the 93 countries participating competed on a level playing field, as everyone from independent boutique agencies to global network agencies have a fair chance of winning the coveted ‘Grand Prix’ award if their campaign is creative and daring enough.

A TIME FOR CHANGE

This year marked the 63rd year of the festival, apart from celebrating the best advertising campaigns there were also three specialist events – Lions Health, Lions Innovation and Lions Entertainment, where they held awards and talks related to each segment.

This year, the festival saw a record breaking over 40,000 entries competing across 24 categories including digital, mobile, direct marketing and outdoor. However just as how the industry is going through an evolution, so is Cannes Lions. Marking a milestone in Cannes Lions’ history, the awards renamed its Press Lions category to become Print & Publishing Lions and its Digital Craft category splitting from Cyber and Mobile Lions.

“This is an award that’s been with us since 1992. By renaming it the Print & Publishing Lions, we are evolving the category, just as the print and publishing world itself is evolving, to recognise other forms of publishing, along with best use of press and interactive press,” Simon Cook, Director of Awards, Lions Festivals shared.

Those are just a few examples of changes made this year; others include The Titanium & Integrated Lions being standalone awards and the Outdoor Lions to add a large Digital Outdoor section.

The evolution of Cannes Lions went beyond its awards, as the coverage of the festival had a digital edge. Even if you weren’t part of the 15,000 attending delegates you still had a chance to be part of the action by tuning in to Lions Live.

As the Official Cannes Representative for Malaysia, this year for the first time MARKETING was able to bring our readers Live talks which won the public vote streamed in real-time on our website.

The campaigns this year were nothing short of impressive, some of the favourites included Y&R New Zealand’s McWhopper campaign for Burger King which gobbled up two Grand Prix in the Media and Print & Publishing categories along with 4 Gold and 2 Silver Lions.

Interestingly, this highly awarded viral campaign which brought the brand nearly 8.9 billion media impressions and US$138 million in earned media started off with a single print ad in the The New York Times and The Chicago Tribune.

Even though the proposed McWhopper burger did not materialise, McDonalds’s CEO Steve Easterbrook declined the proposal on Facebook adding that next time “a simple phone call would do”, the campaign showed how a good print ad could also spark a conversation online.

Another strong campaign which people are still buzzing about came from retail brand REI whose #OptOutside campaign took home 9 Lions including a Grand Prix in the Promo & Activations and Titanium categories.
Inspired by the suggestion by one of its employees, the retailer closed all of its 143 stores in the United States on Black Friday, the busiest shopping day of the year, paid its employees to take the day off and asked its members and customers to #OptOutside instead of spending Black Friday indoors.

“It’s unbelievable that what began as the simple belief about doing right by our employees has grown into something so much more,”Alex Thompson, vice president, Communications and Public Affairs at REI shared.
The campaign not only made an impact on the brand’s consumers but also inspired a movement and led other brands to #OptOutside.

Giving drinkers yet another reason to buy a beer, Heineken New Zealand’s award winning campaign convinced people that their next drink would ‘save the entire world’.

Winning the Grand Prix for Outdoor, “Brewtroleum” highlighted how the brand was being environmentally friendly by turning its leftover brewing yeast into biofuel. The brand created the new fuel which sold in over 60 petrol stations in the country and gave a discount on the promoted DB Export beer when customers purchased it at the gas stations.

To quote Harmandar Singh, MARKETING’s Regional CEO, who was in the South of France covering the event, “There was no roar from the Malaysian Lions this year”.

“As opposed to the 6 metals we brought home last year, this year we came back with our bags empty………. 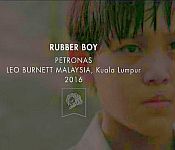