MediaPost and the Standard Media Index’s US Ad Market Tracker recorded a decline in the US ad market for five months in a row. Post-pandemic normalization to transportation has resulted in the expanding of out-of-home (OOH) ad spend.

The information you need about this particular period for traditional, digital, and programmatic OOH advertising is provided in the following five charts by Sara Lebow. OOH spending has returned to normal sooner than expected as people resume travelling and commuting. The anticipated overall spending in the US to reach $9.22 billion this year, up from the $8.65 billion we saw prior to the epidemic in 2019. The US OOH ad spend growth will decline to single digits starting in 2019. Additionally, you should anticipate a rise in the share of digital. At the moment, traditional OOH spending makes about 70.8% of overall spending. These industries are most positioned to benefit from the technology since improvements result in improved assessment tools, the study finds. Compared to these other categories, rises in the automotive and tourism industries, two of the ones that cause consumers to actually view OOH ads, will see less of an increase 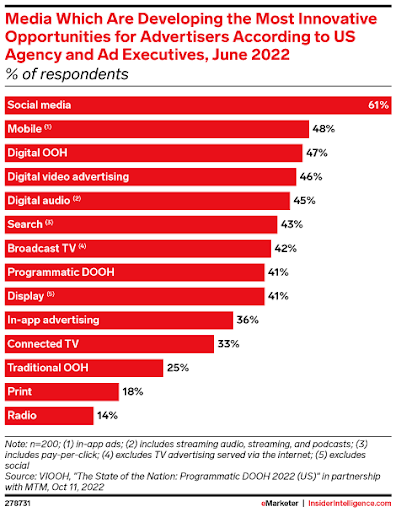 According to VIOOH, a DOOH marketplace, 47% of US agency and ad executives believe DOOH is creating the most innovative advertising chances. It now trails only mobile advertising and social media. Although programmatic DOOH scores slightly lower, 41% still find the format to be creative.

Programmatic DOOH will offer enormous possibilities for advertisers as retail media takes off. Only 6% of respondents to CivicScience’s survey claim to pay the greatest attention to OOH advertising, compared to roughly a quarter who say they do so for TV or online advertisements. OOH commercials, which are typically at the top of the funnel, are inferior to TV and online advertising in terms of assessing returns.

The main lesson is that relative to 2020, OOH is in a good position, but don’t anticipate continued strong growth. Overall, the category has stabilised, and the rate of increase in ad spend is decreasing.

While programmatic DOOH is undoubtedly an area to watch as retailers get inventive with their use of consumer analytics, OOH may not be the primary driver of consumer activity.