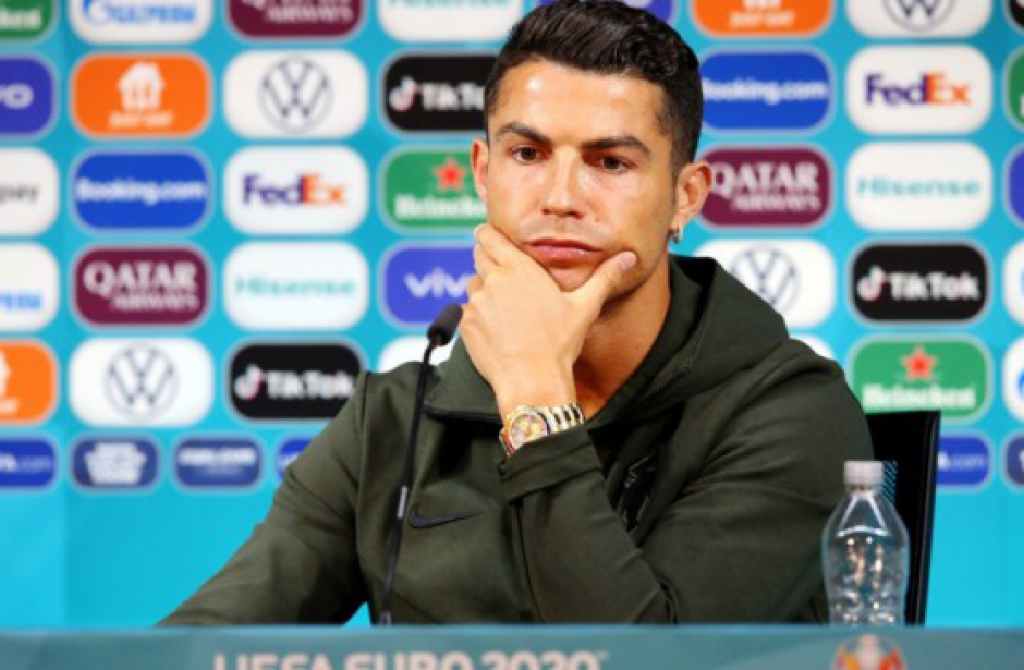 What are sports people up to? Are they asserting player power, and speaking up against the corporate machine, for what they believe?

Cristiano Ronaldo moves Coke bottles out of the way in a press conference, and then says truculently says, “Agua!” (“water!”)

Perhaps inspired by Ronaldo, devout Muslim Paul Pogba moves a Heineken 0.0 bottle off the interview table, though the beer behemoth’s logo is clear in the backdrop behind Pogba.

Osaka’s withdrawal saw a wave of support from fellow sportspeople, who saluted her gesture to protect her own mental health. She is a painfully shy person. Her sponsors have not flinched, yet.

The footballers’ gestures have caused much debate in marketing circles, because top sponsors have paid millions to associate themselves with Euro 2020, not easy in times of pandemic. And football tournaments need sponsors as much as they need broadcast rights. Sponsors have not stated anything other than bland stuff in public, but for sure UEFA will be worried and huddled in discussions. They cannot afford to antagonize Ronaldo, the world’s biggest Instagram celebrity with 299 million followers. But if more footballers follow suit, sponsors will definitely negotiate harder next time around, or tweak their contracts.

As marketers what lessons can we learn from this trend of speaking out by sportspeople?

Sponsors should avoid ham-fisted or ancient modes of product placement: Placing those Coke bottles on the table may provide some old-fashioned metrics of brand visibility, but it does not ever translate into brand credibility. No one thinks Ronaldo, one of the fittest footballers on the planet,  guzzles Coke, though he has endorsed the brand previously, and got paid to star in commercials, back in 2006. The sponsors’ logos already appear during the games. Brands need more meaningful placements, perhaps on digital and other platforms, that drive engagement and credibility rather than plain old reach.

Sponsors need to stretch beyond the obvious towards unique, brand-matching relevance that prompts brand consideration or brand love. The solution could lie in content and creating some unique associations. For instance, the PGA had a serious of very watchable trick shots, which was sponsored. There is a tradition of skipping the water on the 16th hole at Augusta during practice rounds, and recently a trick shot by Jon Rahm got 27 million views. Such kind of engaging content is worth sponsoring. At Euro 2020, Coca Cola could have looked at sponsoring trick shots, practice session footage, interviews with players for social media etc. Even old-fashioned relevance is good: note Rolex’s sponsorship of tennis’s clocks, and Hublot in the English Premier League.

Plan for unforeseen eventualities: Every sponsorship comes with some risks. Planning and anticipating is important for brands to win. UEFA’s statement in response to Ronaldo’s gesture is quite solid: they noted that players are offered water, Coca-Cola and Coca-Cola Zero Sugar at press conferences and that they “can choose their preferred beverage. Coca-Cola offers a range of drinks to suit different tastes and needs, which are available to players throughout the tournament.” But it would be interesting to see Coke make some kind of veiled comeback.

Be ready for social: These actions in news conferences are mostly reported online and in social.  Hence the bar on how to associate positively with the passionate emotions of sports has been raised higher because of the growing power of athletes and social media. Coke needs to translate its real world defeat into a win or response in social media. For instance, India’s adhesive brand Fevicol, nurtured for years by brand building legend Piyush Pandey, had a quick and fun social rejoinder.

Make no mistake. Sport definitely needs sponsors to sustain itself: it cannot do so solely from broadcast rights and gate revenues. Ronaldo’s gesture may have partly been born from his frustration of seeing his kids drink Coke (something he has spoken about in interviews). But it has created an interesting moment for brands to re-consider and re-jig their efforts at sponsorship.

Sandeep Joseph is the CEO and co-founder of Ampersand Advisory, a strategic media and data-driven consultancy. The company’s mission is “business results now!” and it has won numerous local and international awards.  The views expressed here are the author’s own: you can debate with him at [email protected]