Apart from delivering branded capsules, advertisements, music videos, contests and customised content, the ‘Syukur Selalu’ collaborations extend further to include exclusive product packaging and a charity drive to touch the hearts of consumers, while inspiring them to play a part in caring for the larger community.

“Over the years, ‘Syukur Selalu’ has become the platform of choice for brands during Ramadan and Syawal.

By leveraging our inherent strengths in developing content that touches the hearts of the Malay audience and delivering them through the widest range of integrated media channels, the ‘Syukur Selalu’ campaign, and partnerships provide brands an unparalleled nationwide reach, and more importantly help them establish a meaningful connection with their audience. ‘Syukur Selalu’ is more than just a commercial brand campaign,” said Datuk Kamal Khalid, Chief Executive Officer Media Prima Television Networks.

“It is inspiring to see these brands and Media Prima Television Networks coming together in so many creative ways with the aim of encouraging acts of kindness. “This serves as a timely reminder for Malaysians to be thankful while enjoying the celebration since Ramadan and Syawal is a blessed season of reflection, generosity and tolerance.” he added.

As part of the collaboration, NIVEA created a short drama entitled Setulus Belaian Kasih starring Siti Elizad Sharifuddin and Puteri Balqis Azizi which paid tribute to mothers who instilled the value of kindness in their children from an early age.

The brand aimed to raise RM100,000 to help 100 underserved families to celebrate their Hari Raya.

Customers are able to contribute by purchasing NIVEA products and contributing 5% of every RM10 spent at participating retailers to the needy families identified by Yayasan Budi Penyayang Malaysia (PENYAYANG).

POS Malaysia, on the other hand, connected the nation by reliving the custom of sending heartfelt wishes for a joyous Ramadan and Syawal.

The collaboration kicks off with a greeting capsule presented by Syukur Selalu ambassador, Amyra Rosli.

The special capsule was developed to emphasise and put the phrase ‘Pos Lajukan’ in people’s day-to-day conversation.

In addition, POS Malaysia’s ‘Go 2 Truck’ will also be traveling together with the Bazar Syukur Selalu crew.

In addition to providing access to a variety of post-office services, the roadshow features the ‘setemku’ activity, where visitors can snap pictures at a designated photobooth and generate personalised stamps.

There is also a special branded series of the extended scenes both on-air and online.

To further inspire people to cherish the bonding moment with their family members, NESCAFÉ Classic had released a brand ad featuring its ambassador, Siti Saleha.

Another brand following the ‘Syukur Selalu’ spirit is Bank Rakyat, who is launching the ‘Ceria Beraya – Dalam Keceriaan Ada Kesyukuran’ campaign to add joy and sparkle to the Ramadan and Syawal celebrations.

In addition to its corporate campaign, Bank Rakyat is introducing the special music video ‘Indahnya Lebaran’ by Shuib Sepahtu and Mark Adam, which is set to be aired on TV3.

Going beyond the screen

Earlier this month F&N announced its partnership with beverage brand F&N, creating a multi-platform sponsorship during the festive season.

Through the partnership F&N jointly developed a series of content variations which included brand advertisements, drama series and product integration, to deliver useful knowledge to Malaysian viewers and highlight their products.

In conjunction with the partnership, the brand went beyond the screens to promote the partnerships with the two brands by launching a special limited edition F&N packaging carrying the ‘Syukur Selalu’ brand featuring in stores.

This year was a first of many for Media Prima to promote its ‘Syukur Selalu’ campaign via external promotions, Pavilion through its partnership, integrated all the branding of the TV network’s festive campaign into the retail mall’s festive decoration.

Malaysia’s leading detergent brand TOP also is on board with an on-air to digital and social media campaign, #TopGayaRaya promoted across Media Prima’s integrated platforms.

TOP has also come on board as the official sponsor for the programme, ‘Glamour Raya’, which highlights Hari Raya fashion trends and follows the journey of Malaysian designers as they produce their Raya collection.

Apart from its existing platforms the ‘Syukur Selalu’ Raya campaign includes on-ground events including Bazar Syukur Selalu and Jom Masjid, a new initiative that brings Muslims together to mosques to bergotong-royong in preparation for breaking fast and congregate for prayers

On Air: Festive ads that shined this Hari Raya The Gunn Report for Media 2016 Revealed 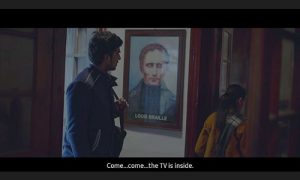 Over 33 million people have watched Samsung India’s latest ad, have you?