The Cannes Lions International Festival of Creativity has released its annual Global Creativity Report, providing in-depth analysis and rankings from the 2018 awards.

The report shows that one of the most changed rankings is the Top 20 Independent Agencies, where Jung von Matt Hamburg, who failed to rank in the Top 20 last year, knocked Droga5 New York off the top spot. Wieden+Kennedy London returned in 3rd place after being absent since 2015, while Mother London ranked at 5th after a two year absence. 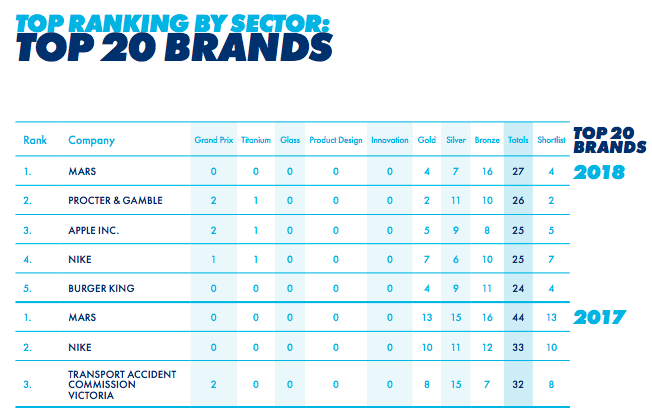 “We saw huge engagement from brands this year as they continue to recognise the value of creativity in driving their business and brand reputation,” said Philip Thomas, Chairman, Cannes Lions.

“It’s been interesting to see the shifts in the Top 20 Clients as a result of this, including AB InBev ranking in the top 20 for the first time, McDonald’s climbing up the table to 6th which is their highest held rank to date, and Volvo returning after a one year absence. As clients continue to invest in creativity and drive it through their brand, this is an unfinished story which will shift and evolve over the coming years.”

Mars retained its place as the most awarded client, while Apple Inc. had their strongest year, seeing their first ever placement in the Top 20 Clients, ranking in third with 25 Lions and two Grands Prix, and taking the top spot in the Consumer Electronics rankings. PeoplExperience opens its doors in Malaysia The hidden truth about media rebates: Agencies are paying settlements but they are not being disclosed