Kids are a difficult demographic to market to, largely because public opinion and major media so often focus on advertising and marketing’s negative effects on children.

In the UK for instance, there is even a “Campaign for Commercial-Free Childhood”, whose director, Susan Linn wrote:

“Advertising, in and of itself, is harmful to children.” Marketing targets emotions, not intellect.
“It trains children to choose products, not for the actual value of the product, but because of celebrity or what’s on the package.”

But the fact is kids are an important demographic; and to some companies, an essential marketing target. The solution, then, is not to stop marketing if your brand appeals to children, but rather to discover ways to market and monetize to kids ethically.

When we think of marketing to kids, our thoughts generally go straight to fast food and entertainment, But it’s not just those market segments that are looking to improve their marketing to kids.

What’s more, in some cases, ethics dictate that companies not market to children at all. But if marketing is actually ethically appropriate, there are best practices to follow.

It will be noted that while we in Malaysia have been exposed to many of the trends in Western countries, the trickle-down effect is not as overwhelming as feared.

For instance, parents here do exercise considerable care and control over children, be it in their behaviour, spending habits or even buying gadgets.

Even with affluent families, the manner in which the children spend their pocket money appears to be monitored. While many have the freedom to freely spend on food, that is not the case when it comes to buying expensive “smartphones” or other such devices.

While many have smartphones, they are usually bought by parents themselves and the children are free to use them in a controlled situation. For instance, at home, while at least one parent is at home, the child is allowed to “do his own thing” under the watchful eye of the elder.

Yet there is a noticeable trend among families who gather on weekends at some coffee joint, each plonked on a chair with a smartphone in hand and just doing whatever comes naturally. There is little or no communication between the family members (usually father, mother, brother and sister) except perhaps when it comes to “pass the sugar”…..

This is a common sight in many shopping malls in the country. And after they have had their meals, they are off…..

However you can be sure that no child has been misusing his or her mobile device. The only drawback here is the lack of verbal communication between family members.

On the other hand, with the less wealthy families, the lack of a smartphone or Astro creates a lot of inter-action and verbal communication. The father may have a mobile phone which is kept in his possession, but can be utilised by the child when need be. There is this disparity between the affluent and the working class. But this is common in any country in the world – the clash between the haves and have-nots.

Children from poorer backgrounds surprisingly do not “crave” smartphones or other such mobile devices. They are aware that it costs too much. And even if they have some money, it will not be thrown away on expensive mobile phones. Their concerns seem more toward shoes for everyday use, clothes and other such items that they find useful.

In Western countries “children are big business”. In that they have the power to influence their parents to buy, buy and buy….and money is no object. Parents are giving in to the demands of the young ones. So it’s a multi-billion “dollar” industry or sector.

There have been fears that Malaysians would fall prey to this syndrome – but it appears that for the moment, that is not the case. Asian values and child upbringing are the key factors.

Also, marketers themselves are exercising restraint or self control when it comes to marketing to children. This “self-control” may not be the ideal way to deal with this matter, but it appears to be holding and the combination of factors mentioned earlier have allowed for “sanity to prevail”.

But just because we don’t have a problem yet, does not mean we will not have one sometime in the future. For that reason, this topic was taken to a Marketer and to a renowned psychologist. Their responses make interesting reading.

Unlike other countries, Malaysian parents exercise greater control and care when it comes to pocket money and spending/buying habits of their children.

It does not really matter if parents are well to do, or are making ends meet…that control is there.
Children from more affluent backgrounds are just as careful as in the end, any purchase has to be explained.

It is more likely that richer parents will reward kids with smartphones, rather than the kids themselves buying them.

To the less affluent children, pocket money is for food and drinks. Yes, they think of smartphones and may have even used them, but they know it’s not affordable (yet)

“That sounds quite in line with Maslow’s hierarchy where the most basic needs are obtained first. I’m not sure if we are unlike other countries in this respect. It would be good to have evidence from other countries before we can say that.”

Maslow’s hierarchy of needs is a theory in psychology proposed by Abraham Maslow in his 1943 paper ‘A Theory of Human Motivation’ in Psychological Review. Maslow subsequently extended the idea to include his observations of humans’ innate curiosity. His theories parallel many other theories of human developmental psychology, some of which focus on describing the stages of growth in humans. Maslow used the terms “physiological”, “safety”, “belongingness” and “love”, “esteem”, “self-actualization”, and “self-transcendence” to describe the pattern that human motivations generally move through.

Most research are from affluent western countries where cultures are different. Generally, research in Malaysia is not strong. Nevertheless, market research companies need to actively collaborate with academic researchers in the country to find out how children are affected by certain types of marketing strategies.” What Brands Should Know About Advertising On TikTok In 2019 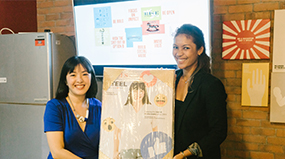