The court ordered that Internet service providers block access to these tv boxes.

This follows the hearing of a motion filed in October by Singnet, Fox Networks Group Singapore, NGC Network Asia, Fox International Channels (US) and the Football Association Premier League.

According to the Asia Video Industry Association’s (AVIA) Coalition Against Piracy (CAP) such apps flagrantly infringe copyright by acting as gateways to websites streaming pirated content.

The motion was heard in the High Court on Nov 2 and the order was granted by Judicial Commissioner Dedar Singh Gill.

Singtel, Starhub and M1 said they have complied with the order.

“Configuring boxes in this way allows unauthorized access to TV channels and video-on-demand content, with the revenue going into the pockets of criminal syndicates and individuals,” said AVIA chief Louis Boswell.

CAP general manager Neil Gane said that one of the app that was subject to the blocking order was UBTV, a pre-loaded application owned by China-based company Unblock Tech.

Unblock Tech has more than 500 agents and distributors worldwide and claims to have customers in Singapore, Malaysia, USA, Canada and the UK.

“Consumers why buy ISD’s are not only funding crime but also waste their money when the channels no longer work as well as risk getting affected by malware,” said Gane.

As a safeguard to prevent streaming content from unauthorized sources, the Ministry of Law has also proposed new laws banning the sale of set top boxes.

The proposes changes were the culmination of a three year review including consultations with the public.

It proposed new enforcement measures to deter retailers and service providers from profiting off providing access to content from unauthorized sources such as these boxes.

A November 2018 study of the content viewing behavior of Singaporean consumers, revealed that 15% of consumers use a TV box which can be used to stream pirated television and video content.

The survey, commissioned by the CAP and conducted by YouGov, also highlighted the detrimental effects of streaming piracy on legitimate subscription video services.

Of the 15% of consumers who purchased a TV box for free streaming, more than a quarter (28%) asserted that they cancelled their subscriptions to a Singaporean-based online video service as a direct consequence of owning an ISD.

Taking a leaf out of Singapore’s book, in Malaysia industry players have also pushed for similar action.

Media Prima TV Networks CEO Johan Ishak as well as CEO for Primeworks Studio Datuk Izham Omar have both lobbied for such a move against creative content piracy in their official dealings with the Ministry of Domestic Trade and Consumer Affairs as well as the Malaysian Communication and Multimedia Commission.

Other industry players are encouraged to also voice out the same concerns or else the economic well being of the Malaysian creative industry will suffer.

Lam Swee Kim, CMO of homegrown Malaysian Video-on-Demand service providing Asian content in the region dimsum said, “The development is a big leap in managing piracy. It is an industry wide challenge from broadcast to OTT services. It is a constant struggle for legitimate services to justify their value and existence. With this step by the Singapore High Court, it does provide a lot of support and precedence for Asian countries to look into this seriously. Apart from protecting the industry it will also protect consumers from unscrupulous resellers of TV boxes who cheat and rip content from other sources.”

Astro’s Henry Tan commented, “We welcome this news from Singapore. Malaysians need to be aware that digital piracy is the greatest threat faced by the industry and has a negative impact on the economy. Anti-piracy activities combining technology, legal and enforcement action, and consumer education are needed to effectively combat piracy.

Sharing what Astro has been up to he added, “We continue to cooperate and have dialogues with the relevant parties, namely internet service providers, telcos and authorities. All of us must face up to the far reaching consequences of consuming pirated content such as loss of jobs and revenue for Malaysians.” 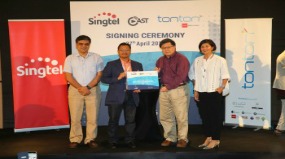