The tech giant and US supermarket chain are making it faster to navigate grocery aisles and pick up online shopping orders.

America’s biggest supermarket chain Kroger and Microsoft Corp. are collaborating to bring the convenience of online shopping to brick-and-mortar grocery stores, according to Bloomberg.

To test out these new features, Kroger has remodelled two stores, which include “digital shelves” that can show ads and change prices as well as a network of sensors to keep track of products and help speed shoppers through the aisles.

The same report indicated that Kroger has plans to introduce the cloud-based system it developed with Microsoft in all of its 2,780 supermarkets.

This partnership is an example of how US retailers are utilising data-rich technology to improve grocery shopping.

Kroger also hopes to sell the technology to other online retailers and potentially open up a new revenue stream with bigger profit margins that selling groceries.

“Together we can create something that, separately, we could not,” Kroger chief executive officer Rodney McMullen said in a joint interview with Microsoft chief Satya Nadella.

The report also revealed that the digital shelving system debuted in the fall and can now be found at the end of the aisles at 92 Kroger locations.

At the two test stores, customers using Kroger’s self-checkout app will be guided through the store to items on their shopping list.

When they enter an aisle, the digital shelf will display a icon chosen by the shopper such as a banana or pumpkin below the relevant product.

At the test store 10 minutes from Microsoft’s US headquarters, more than half of the shelves have been converted into digital displays that light up with a personalised icon when shoppers reach an item they had placed on the shopping list in the Kroger app.

Ellipse-shaped black-and-white devices that look like a cross between a camera and a smoke detector are mounted on ceilings, crunching data and monitoring for out-of-stock items.

In a refrigerated meat case, temperature sensors appear every few feet, automatically flagging workers if the case warms up too much. This helps prevent the estimated US$10,000 worth of meat inside from spoiling.

The smart shelves light up to help store employees pick orders for Kroger’s curbside grocery pickup service, where customers order online and then later in the day have their bags brought out to their car in the parking lot.

The companies say this “pick-to-light” system can cut in half the time required to pick each order, a possible advantage as rivals such as Walmart and Target perfect their own curbside pickup services.

Video trailers for upcoming Hollywood movies could also be part of the advertising mix.

Microsoft has also signed up the likes of Macy’s, Walmart and European grocer Ahold Delhaize, which would prefer not to pay Amazon for critical technology.

Besides Kroger, other retailers like Macy’s, Walmart and Ahold Delhaize are also entrusting their data and tasks to Microsoft’s Azure cloud service. During Bill Gates’ Microsoft days, he thought ‘sleeping a lot was lazy’—now he needs 7 hours a night 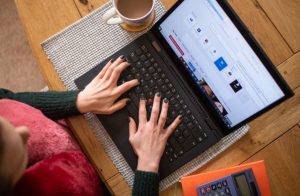