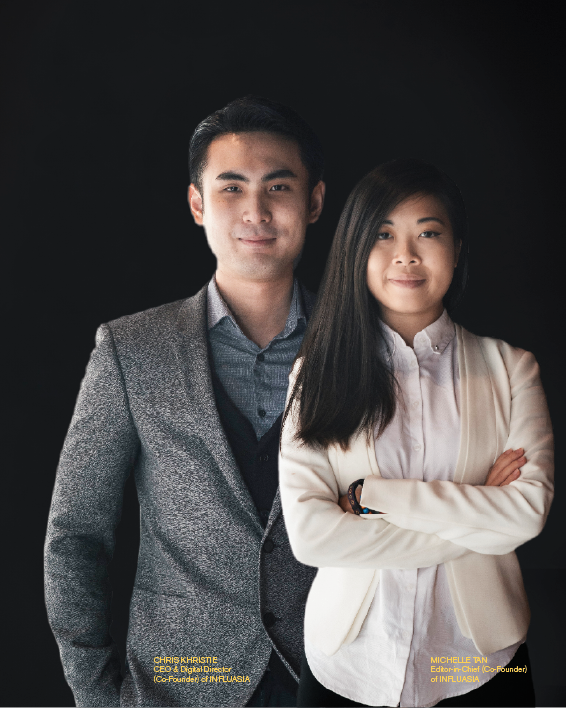 Great things are often accomplished in pairs. History itself is a living proof of this. From duos way back when – like the Wright Brothers to those in the tech industry of today like Steve Jobs and Steve Wozniack – there is simply no imagining one without the other. Enter Malaysia’s very dynamic own duo. 27-year old Chris and 26-year old Michelle. The duo are the founders of WORLD OF BUZZ, the largest English social news portal in Malaysia, along with two other well-known, local publications Lobak Merah and NOODOU. Each portal covers viral stories, unique listicles and creative videos that cater to the English, Malay, and Mandarin-speaking communities in Malaysia.
With all three publications strongly cemented under their company INFLUASIA, both Chris and Michelle aren’t afraid to dream big and are already charting out the next big thing from INFLUASIA as they aim to be the largest digital group in Malaysia.
However it wasn’t all roses and sunshine to get to where they are today…
How did you first meet each other?
MICHELLE: It was in 2012, when I was hanging out in a bar with a couple of friends. Chris came over, tapped me on the shoulder. Funnily, half way through the conversation, he almost fell on me. In which he cheesily responded, “I’m just falling for you.” Clearly that pick-up line didn’t fall through as now we’re best friends.
CHRIS: Yup, that was me 5 years ago. (The whole room bursts into laughter)
Was WORLD OF BUZZ the first idea that came to mind?
CHRIS: WORLD OF BUZZ wasn’t really the first idea we bounced around. We had car listing ideas, event listing site ideas, basically a ton of them. The one that really got through was our event listing site but we were dealing with it for almost two years. However, we have taken it down now. That was pretty much our first official project together.
During the event listing project, we were also simultaneously working on WORLD OF BUZZ which at that time was still an infant. We were observing if WORLD OF BUZZ was gaining any traction and whether people were reacting to our content. We then made the bold move to say goodbye to our event listing project to pay full attention on WORLD OF BUZZ. From event listing to content creation! How did that idea come about?
CHRIS: We actually pulled out WORLD OF BUZZ from whatever archive we had. Our event listing site was a completely new thing that we started from scratch. With WORLD OF BUZZ, we actually refined the direction – from something that was more personal to something that is more informative and consumable by the public.
MICHELLE: My go-to content would especially come from social media portals like Twitter, Facebook and websites like Thought Catalog. Everything runs like clockwork, Chris has the insight on how to deal with the technicalities and the marketing side of it while I deal with the editorial side. One advice I would give is that you and your business partner must complement each other in terms of expertise for the right synergy.
What were the challenges that you guys had to go through when you first kick-started WORLD OF BUZZ?
CHRIS: It was all trial and error work. We faced a lot of hiccups. When we first started, we had a couple thousand followers and even tiny things like 100 page views would get us excited. So imagine our feelings when we obtained our first 1 million page views.
You also really have to be on social media 24/7 since a lot of our stories come from people experiencing it in real life. We have to really monitor social media religiously to find stories that are exciting to our readers. That’s how we started picking up news as quickly as possible. If not, then we generate content that is unique and relatable to Malaysians with a dash of spice and humuor.
One of the many challenges we faced was on the technical side. It was a lot of R&D when it came to building the website. Back then, our server capacity was really small. So we couldn’t accommodate a huge number of people coming to the site at once. As we all know, virality is unexpected. We had to struggle with a broken site from time to time because our server would crash whenever an article goes viral.
However no worries now. Thankfully we have already upgraded to a really solid server so that we can host millions at one ago.
MICHELLE: Firstly, I was never from the broadcasting background. I was originally from real estate management and I was doing my degree at the same time when we kicked off WORLD OF BUZZ in 2015. One of the struggles was also juggling releasing content for WORLD OF BUZZ and studying at the same time. In between breaks, I would write up an article and post it up. It was basically dedication.
Digital media was new to a lot of us, so we weren’t sure what we could post and what we couldn’t. Plus, it was just the two of us. So we would be working 7 days a week, dealing with the sales, operation, basically everything. INFLUASIA has 2 more news portal sites besides WORLD OF BUZZ, which is Lobak Merah and NOODOU. How did this come about?
MICHELLE: WORLD OF BUZZ is very urban, just full on English but you sometimes get the appeal from the Malay communities. So we had the idea, why don’t we cater to them? You’d be surprised, content that do well in WORLD OF BUZZ may not necessarily really perform for the other two portals.
You really need to know what caters to different communities. In the case of NOODOU, the readers go for more funny, humorous articles. Lobak Merah has more viral-type news but we are careful to keep the news politically correct.
CHRIS: We started WORLD OF BUZZ in 2015. Incorporation wise, INFLUASIA began around June 2016. That’s when we legally became a company. Then we ventured to Lobak Merah in September 2016 to cater to the Malay audience.
NOODOU is our most recent addition, kicking off last year July. Currently, we’re putting our sights and directions in possibly venturing into niche areas such as food related content.
At this point, every industry is trying TO capture the elusive millennial audience. What kind of content engages THIS generation?
CHRIS: It’s not what, but HOW you deliver the content. On a daily basis, our writers would pick out several topics they’d like to write about, and if a majority of the editorial team agrees that it is relevant enough for our audience, then it’s a green light!
Then comes the important part, how the writers structure the story out – it has to be kept concise yet fun for readers to stay engaged. If it’s a good story, but it’s not well written, then it won’t work.

From the time that you guys started till today, what do you observe in terms of content? What has changed?
MICHELLE: Back then, anything that captured our attention, we would write about it. Now, we have a lot of processes to go through. If it’s too sensitive to cover, we think of ways on how to dial it down to ensure we don’t spark any controversial messages. Currently, we don’t cover too gory, negative news. Instead, we cater to a more lifestyle content.
Can you give me an example of content that the team has created for the client – which unexpectedly reached massive coverage/awareness – eg, How did the idea for the content come about, the results later on, etc..
CHRIS: One of our most notable content was for ONE Condom. ONE Condom basically launched really interesting, fancy types of condoms and were looking for mass brand awareness.
MICHELLE: For our ONE Condom client, we wanted to have a good balance, not too kinky but just snappy enough to catch the audience off guard for the project. Firstly, we have a specialised creative content team for our clients. I would narrow it down to two goals; either the client wants branding (mass brand awareness) or they want more conversion-based results.
We narrowed our ideas down to couples and relationships, and to make the article more relevant and stand out, we went to a mall to spot actual couples and took photographs of them. The article did really great. We had over 390,000 reads and 11.8K shares on that single ONE Condom article.
What do you believe is the future of content?
CHRIS: For me, I believe the future of content is going to be more concise. A lot of people get frustrated when they have to wait for even a second for a website to load. As long as someone is capable of producing content that can be understood in the shortest amount of time via visual, meme, video, or article – they’ll definitely be the champion.
MICHELLE: In terms of branding and content marketing, the future will be all about genuinity.
Sometimes people do not want to read paid content, because they have the perception that if it’s sponsored, the product is not necessarily good and I find it sad because it’s not true – some sponsored products/brands are actually worth mentioning.
So the future of content should reek of honesty, to send the genuine message of why readers should know about the product/brand and why people love it.