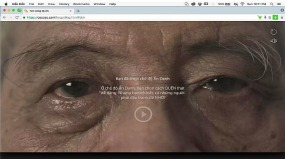 It uses Cốc Cốc’s existing incognito mode to call attention to the forgetfulness that characterises the disease. When using incognito mode, or private browsing, the pages viewed do not stick around in the browser history, cookie store or search history after the tab is closed. Essentially, they are not remembered.

Cốc Cốc has renamed their private browser “The Forgetting Tab” and is presenting users who want to surf incognito with an emotional message (via film) about Alzheimer’s, in the hope of bringing people’s attention to this serious, life-debilitating disease. Users could then click through to learn more about the disease and care.

The film was scripted and produced by Isobar Vietnam with the help of production company, Yeti Films, and directed by award-winning Tibetan filmmaker, Tsering Tashi Gyalthang. But why “The Forgetting Tab”? to the agency the reason is simple, for some users of Cốc Cốc, it’s their choice to forget, but for Alzheimer’s patients, they have no chance to remember the precious things or memories they’ve had in their life.

The Forgetting Tab is a project which reminds people to help those who forget, to learn more about the disease and to be more sympathetic to those who suffer from it.

According to the agency’s research almost half a million* of Vietnamese are currently suffering from Alzheimer’s, however, the awareness of the disease and its symptoms is still very low. Given there is a stigma associated with the disease, many sufferers usually do not seek treatment or admit to having it. Therefore there is a possibility that the numbers of sufferers could be much higher.

Cốc Cốc also hopes to encourage more sufferers to come forward and seek treatment as a way to slow down the debilitative process of Alzheimer’s and give more precious time to them and their families.

Victor Lavrenko, CEO of Cốc Cốc, shared on the collaboration, “Cốc Cốc decided to partner with Isobar on building awareness for Alzheimer;s because while the disease is severe, there is no cure at present. We hope that our campaign can get people talking and help better the situation for the many sufferers and their caregivers. And, who knows? It might perhaps inspire one of our many young users to go to university, study neuroscience, and even invent a cure in the future.”

Rajib Gupta, Creative Director of Isobar Vietnam, said, “Alzheimer’s is a growing problem in Vietnam and “The Forgetting Tab” is a simple, yet innovative approach to generate awareness, especially in a country with massive internet users (51.5% of the population). This is an idea that can easily be adapted by other browsers with private browsing / incognito mode. At Isobar, we believe in the power of creativity to not only transform brands and businesses but to also do good for society, and this is one of the ways we can help the communities we live in.”

A media campaign was also designed by Isobar and is currently running until the end of June 2017.

The campaign has been well received in its first week with 729,078 media impressions, 8,818 click through and 380,730 new browsers installed. Check out the campaign film in English: