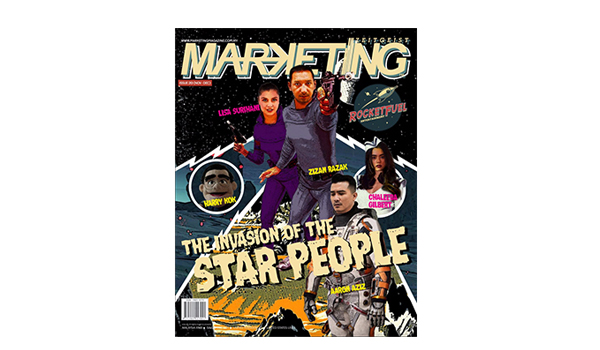 This month of MARKETING magazine covers influencer marketing outfit Rocketfuel, which is firing on all cylinders with Rocketfuel Entertainment, Rocketfuel Network and Rocketfuel Records.

Forbes recently reported that, “With the rise of ad blockers and decline in radio and TV viewership, influencer marketing has proven to be the most effective form of advertising. It was on every trend list in 2017 and will continue to be a focus of smart marketers in 2018.”

We join Rocketfuel Entertainment’s Admiral, Moots (picture) for more on stuff like content, celebrity endorsements and a character called Harry Kok…
Who is Harry Kok?

Harry Kok (puppet picture) is a character created to disrupt traditional notions of entertainment among urban Malaysians. We wanted to see how far we could push the perimeters of digital content without getting technical about platforms and technology.

When creating the character, we went all the way, giving him a full biodata and listing down his characteristics, experiences, pet peeves, heroes, family background, etc.

We wanted Harry to be as real a person as possible.
We set up various social media accounts for him, including Tinder!

Harry Kok is an interesting proposition at Rocketfuel, as he is both an IP and a talent. Urban Malaysians seldom consume Malaysian-made content, and Harry is changing that. Data shows that Harry’s appeal cuts across urban demographics both young and old, male and female.

Harry has become somewhat of ‘the people’s champ’, as he is relatable and says what others dare not say.
His catchphrases “I am the Malaysian” and “U think wat” breed  familiarity and a sense of ownership for the character amongst Malaysians.

Earned media is every marketer’s dream and one ROI justification for investment in Influencer Marketing…
Numbers are a good guide but this is not a zero sum game: there are real winners.

Earned media through associations with stars or celebrities is priceless. Brands need to get off this ROI bandwagon and look beyond, because star appeal will disrupt all the metrics they have been working with so far.

This could be done by developing true brand ambassadors with talents who are passionate about the brand and will create long term conversations and affinity or ownership of the brand.

Can you share your content creation cycle, right through to social media and IP?
We have an open session where anyone can pitch an idea for content, be it a member of staff or even one of our own talents.

When an idea gets shortlisted, we proceed to the development phase where the concept is fine-tuned and the format of the show is set.

While the script is being ironed out, we also begin work on things like fonts, music, thumbnails and banners for our channels, plus  social media tags to be used in postings.

With the number of shows/content we produce, we usually spend Week 1 filming, while Week 2 is purely post-production.

Week 3 is when we start our promotion of the shows, with teasers and trailers posted on social media, and Week 4 is spent in pre-production for the coming week’s new cycle of filming.

Once full videos have been released, we keep the shows relevant by regularly uploading pictures on social media, as well as engaging with fans in the comments section, because we believe that interaction with our core audience is crucial in fostering a sense of ownership of the content.

An original idea may be given up to 4 or 5 episodes to find its niche, and hopefully connect with audiences, but in the off-chance it does not, we will not hesitate to pull the plug and refocus our energy on other shows instead.

If the show gains traction, we then look at moving forward in terms of copyrighting logos and catchphrases for use in merchandising.

We would also then look to approach potential sponsors with regards to partnering on branded content.
Are Malaysian consumers more attracted to foreign stars than local celebrities?
Local talents have just as much clout as their international stars, but it’s a case of different strokes for different folks, that’s how influencer marketing works – go where the fame is.

Rocketfuel’s first regional talent is Chaleeda Gilbert (picture) from Thailand who released her first Thai single with over 1.3 million views on YouTube in just 10 days. Her first English single was released regionally recently.
Rocketfuel’s talents and content IPs have a social media reach of over 36 million with influential personalities in beauty, fashion, lifestyle, automotive, parenting and more.