Macy’s department stores (originally R.H. Macy & Co), the third largest advertiser in the retail space, have been providing consumers with everything from dry goods to clothing since the mid-1800s, opening up their first location in New York in 1858.

However, since 2010 they have closed 90 locations and recently announced that at least another 100 of their remaining 728 brick-and-mortar stores have got to go after revenue dropped by 3.9% and profit by 15.6%.

What is responsible for this continual plunge for the stalwart Macy’s that is causing them to shutter more and more physical sites as each year passes?

Of course, there are a number of factors and if the executives knew exactly what the problem was, they’d fix it, but analysts and common sense point to Instagram, Snapchat, Vine, Pinterest, and many other social media channels where influencers (i.e., popular young people) are promoting native online brands to their contemporaries with great success.

If you want to educate yourself, for the past 8 years The Shorty Awards have been pointing out the most successful amongst these influencers and brands that produce excellent content across social media.

Examples include ‘fast fashion’ online clothing retailer Zara, along with the French group Chloé, and even the 107-years-young iconic Chanel, who have all been doing very well in this space even as older sister Macy’s flounders.

They work with the likes of Chiara Ferragni of “The Blonde Salad” who garners over 14 million monthly views; Julie Sarinana who runs “Sincerely Jules” and relentlessly promotes groups from Revolve Clothing to The Gap; and Amy Song’s “Song of Style,” a Forbes “30 under 30” with 4 million Instagram followers hanging on every photo she shares.

Revolve and other online fashion retailers such as BooHoo put out “Lookbooks” on Snapchat before big events like Coachella so everyone knows what to buy before the shows.

They even partner with YouTubers with millions of fans, including Amanda Steele of “MakeupbyMandy24,” to promote their styles well in advance.

Macy’s does none of this, although they did emulate Amazon.com’s “Prime Day” with a “Black Friday in July” event in the way an out of touch person with little understanding of what is happening might try to ape a popular kid’s tactics in order to appear cool, uh, dude. It’s a little like your elderly uncle screaming,

“Whaaaaat’s uuuuuuup?” when he comes over for dinner. What they don’t seem to understand…..

To read the full article get your hands on MARKETING Magazine’s September-October 2016 issue.

Josh Sklar is the President of Heresy and Author of ‘Digital Doesn’t Matter (and other advertising heresies)’. He can be contacted at josh@heresy.co or @chiefheretic. 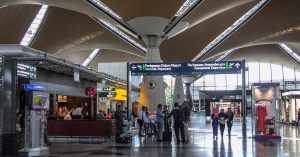 Malaysia Airports announces launch of ‘Shop Like A Hero’ campaign